We often read about how bonds should be part of our financial portfolio for diversification.

However, as Muslims, we know that interest-based investments like bonds are not Shariah-compliant hence we need alternatives.

In layman terms, investors would describe it as ‘halal bonds’.

Though it has its similarities, it is fundamentally different which I will explain in a little more detail later.

In today’s article, we will be covering on the below:

Table of Contents
What is Sukuk?
Why are Sukuks compared to bonds?
How different is Sukuks and bonds?
What are the returns like for Sukuk?
3 Sukuk Investments that are available for retail investors
Buy Sukuk as a Unit Trust
Buy Sukuk as an ETF
Buy Sukuk directly
How to buy Sukuk?
Developments in Sukuk
Alternatives to Sukuk
Personal Thoughts
Now It's Your Turn.

A Sukuk is essentially a Shariah-compliant version of a bond.

Like bonds, it is a financial certificate that represents ownership of a certain asset.

Assets could be in the form of an inventory or machinery, for example.

This normally takes place when a company or the government wants to raise money to buy assets that help in its businesses.

By issuing sukuk, a financial certificate, investors will be able to know upfront how much they will be paid on a periodic basis and its principal amount when the sukuk matures.

‘Mature’ here means the date of the sukuk has reached, the investment has reap its rewards and is ready to be paid out.

Why are Sukuks compared to bonds?

Investors tend to make comparisons between Sukuks and bonds because of the nature of its predictable returns.

Though that is technically correct, the structure behind the returns are different.

How different is Sukuks and bonds?

Sukuk.com did a good summary on the key differences between Sukuk and bonds.

We’ve put it together into a simple infographic below:

From the above, you can see that the key difference lies on how the investments are being used.

In conventional bonds, as a lender, you’re simply making money from lending your money by charging the borrower an interest rate.

You will receive a pre-determined interest amount which is usually paid on a periodic basis (could be 3, 6 or 12 months).

When the bond matures, you will by then receive the full amount, inclusive of the capital that you have invested.

On the other hand Shariah law prohibits the generation of money from money, which is considered interest or riba.

Hence for Sukuk, it is structured differently.

As a lender for Sukuk, you are lending your money to buy and own a piece of the assets that the borrower needs.

In other words, you, as a lender, are sharing the risk with the borrower to buy and own that asset together.

From the purchase of the assets, you as a lender believe that the borrower will be able to generate returns by producing a tangible product or rendering a service with that asset.

And from the profits generated from the product or service, the borrower will then be able to pay you, the lender, an agreed fixed return.

What happens if the borrower is unable to pay the agreed returns?

In any kind of investment, there is always risk.

Hence it is always important to do your due diligence on the borrower’s profile and track record.

Sukuk can be issued by governments and sovereign bodies which are perceived to be safer, more stable and reputable, while it may be deemed to be more risky (but higher returns) for sukuks issued by corporations.

Investing in Sukuk is generally low risk as you have a certain level of predictability of its return. Essentially, you will know upfront how much you’re expected to be paid by the borrower.

With lower risk, returns tend to be lower too.

Having said that, Sukuk has been performing much better than the other global fixed income asset classes over the past five years.

In the same time period and amount invested, S&P Global Developed Aggregate ExCollateralized Bond Index, would have brought you around $10,875.

3 Sukuk Investments that are available for retail investors

If you’re Singapore-based, a quick check on POEMS brokerage will show you at least 3 Sukuk products.

Take note that the first 2 are Unit Trusts (indicated there as ‘UT’) and the 3rd is an exchange-traded fund (indicated as ‘ETF’).

You might then ask - What’s the difference between buying:

Buy Sukuk as a Unit Trust

For unit trusts, your investments are pooled together with funds from other investors and are invested into a portfolio of Sukuks, actively managed by an investment manager according to the funds’ stated investment objective and investment approach.

In the case of Franklin Global Sukuk, at the time of writing, it has:

You can find more info here.

On the other hand, for MAMG Global Sukuk Income-I Fund, a relatively newcomer, it has:

You can find more on Maybank’s page here.

Buy Sukuk as an ETF

Similarly to how other ETFs work, Sukuk as an ETF tracks the performance of a sukuk index.

In this case of SPSK, it aims to track the performance of the Dow Jones Sukuk Total Return (ex Reinvestment) Index.

To be included into the Index, the Sukuk must meet a certain criteria such as:

You may read it more here.

Like any other ETFs, it is relatively low cost as it is passively managed, unlike a unit trust.

To buy Sukuk directly from the, you must likely be required to be an accredited investor who has a certain large sum of investment to make, normally in the 6-digits range and above.

How to buy Sukuk?

Using the POEMS example above, you can simply type ‘sukuk’ into the search field once you’ve logged into your account.

Once done, choose the Sukuk that you would like to go for, in this case I’ve chosen SPSK. 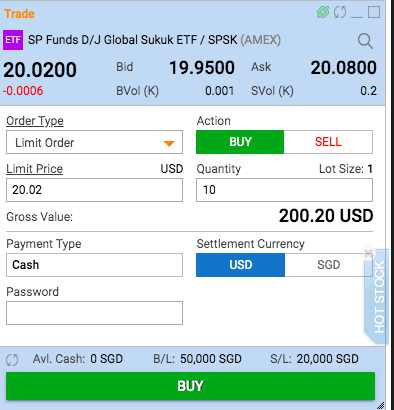 Simply add the ‘Quantity’, or the number of lot sizes you would like to buy.

I’ve chosen 10 lot sizes at the price of USD 20.02 and the final amount of USD200.2 is automatically reflected.

Key in your password, hit the ‘Buy’ button, and you’re done!

The growth of Sukuk has been promising.

Green Sukuk, especially, has been picking up steam with the increasing awareness in combating climate change.

One notable news was in 2019 when the Indonesian government issued the world's first sovereign green Sukuk, a USD 1.25 billion five-year Sukuk, to finance green projects.

We can expect more of such green Sukuk to be issued over the coming decade as the world transitions towards sustainable energy and innovations.

If you prefer a low-risk asset class in which you can park your money and grow it slowly and steadily, then you can also consider shariah-compliant fixed deposits.

Maybank and CIMB have some options here such as Singapore Dollar Term Deposit-i and CIMB Why Wait Fixed Deposit-i, which I’ve written about here.

Alternatively, if liquidity is not an issue, you can consider parking it in our CPF Ordinary Account or Special Account and lock it away till you turn at least 55.

CPF monies are halal as it is recognised as hibah (gift) by our MUIS Fatwa committee.

Sukuk is good if you have a lump sum of cash which you prefer to take little risks on.

This could be more relevant to the people in their golden years who do not have much active income and would prioritise on capital preservation that they have built over the years.

Another instance would be, your aged parents have recently sold off their property and are staying with you. With the lump sum proceeds they’ve received, they could set aside a good portion of it for Sukuk.

Aside from that, if you’re still young and have at least 20 to 30 years to go before you retire, I would encourage you to make your cash work harder for me through higher return investments such as stocks and ETFs.

Reason being, you can take a long-term view in your investments. By doing so, you will be less fazed with the volatility in the short-term ride it through its ups and downs.

Now It's Your Turn.

I’ve laid out Sukuk as one of your key investment considerations.

Now I want to turn it over to you. Would you add Sukuk into your portfolio today, and if not why?

Let me know your answers in the comment section below.

If you would like to open up a POEMS account, do consider signing up through our affiliate link below.

By depositing SGD 3,000 within the first 7 days opening the POEMS Cash Plus account, you will stand to get:

By supporting, it will go a long way towards building SmartMamat into a sustainable endeavour, insya'Allah. 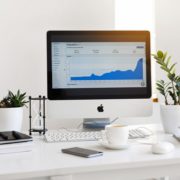 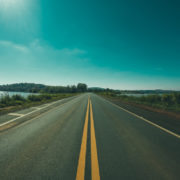